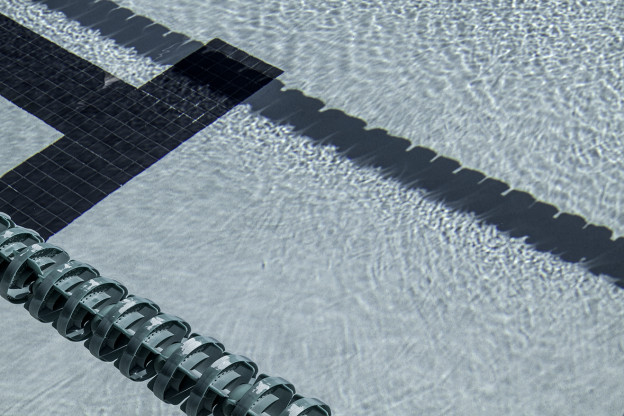 Water, the origin of life, has, from the most remote cosmogonies, symbolized the energy of the unconscious and the creative force, as well as a purifying or healing element. But water is also by excellence, the metaphor of time that flows without stopping. The work of Maritza Caneca (Brazil, 1964) presented by Clima Gallery, links what Gastón Bachelard calls “images of form”, with “direct images of matter”. Her works allow us to confirm that, as the philosopher argued, “the material imagination of water is a particular type of imagination (…) we do not bathe twice in the same river because already into its depth, the human being has the destiny of water that runs”. We are “beings in vertigo”. The well-known sentence of Heraclitus, which refers us to the impossibility of stopping the course of the hours, can be adapted to swimming pools, a name that comes from the Greek word “piscis”, fish, and which also had a curative use since antiquity. At the same time, the notions of immersion and delight, transformation or meditation correlated with water traverse the history of diverse cultures and art of all times, and are essential in the works of Martiza Caneca whose aesthetics of liquidity― also captured in aquariums and seas or oil ― flows between states of time, between chaos and order, between the biographical and the archetypal.

Caneca started the Swimming Pool Series in 2012 after a visit to the hacienda of her paternal grandparents where she spent her childhood vacations and the pool was the epicenter of crowed family lunches and the space of delight and games. Upon returning, three and a half decades after those weekends with its atmosphere of splendor, she was impressed to see “the state of the house, and the pool completely empty and abandoned”, with plants that have another life, the return to nature of the space where her eyes as a girl perceived the images of prosperity. “In that pool that was a place of joy, glamor, encounters, there were only residues and memories … I realized that this void was filled with memories. And how strong they were! “This perception of space vacuum and the concurrence of memories was so strong that she began to research in Brazil the existence of old houses abandoned by the heirs of ancient patriarchs or matriarchs. “The first thing that was left to attend, were the pools, which paradoxically had been the reflection of the power of previous generations.” Little by little she became “the woman artist of the pools”.

But far from reaching a typology of swimming pools, her camera has been transformed into a subjective device to capture memories in the water (or in its absence, in the spaces that should receive it) through the transit that takes it from one city to another. The Series of Pools (full and empty) with which she has begun to insert herself in contemporary art, is an ongoing work that she has developed in pools captured as scenarios― like the School of Düsseldorf or “the Becher class”― in which the presence of people is not necessary to be able to contemplate the conjunction between the intimate and the collective that floats on the surface of the water or that pervades the sediment of its soils, when they are empty. Unavoidably, the pools end up functioning as a cornerstone of a well where you can see your own memories but also as a social mirror of the cities.

She has photographed full and empty pools in Rio de Janeiro, in Sao Paulo, in Istanbul and Havana, in Jerusalem and Cartagena, in Geneva, Miami, New York, San Francisco, Los Angeles, San Francisco, Marfa, New Orleans, Boston, Lisbon, Porto, Hanoi, Bangkok and Cambodia, and each photograph can be read as an image of a visual diary. Not by chance, in another parallel series, she has explored the images of unfolded sheets in beds of different cities of the world. The trail of everyday life in swimming pools is as present as their own mobility from one place to another.

In September 2014, she visited Cuba with the idea of photographing the island’s swimming pools and found that they had been emptied. It was not just because they were signs of the old bourgeois splendor, but because it was expensive to keep them. But they were not abandoned architectures but adapted as new spaces for play. On the island, she exceptionally photographed the pools in the sunlight, since she usually waits on cloudy days to create atmospheres with a diffuse light.

Water is the element where Caneca captures calligraphies of the moment, a “writing” of liquid forms in conjunction not only with the light of a precise hour, but with the memories of the games in the water, evanescent as the flow of the days. For three long decades this female director of photography who six years ago turned to the world of art as an author, studied the lessons of the light of Vermeer, Rembrandt and Caravaggio, as well as the everyday spaces of Edward Hopper.   In her Water Diaries there are also dialogues with the light that bathes the world in the pools of Los Angeles painted by David Hockney, but her photographs and videos almost never contain human presences and if they appear they are swimmers caught under the surface, with the delight of being submerged in the primordial element. Her approach is also much more focused on the formal languages of water and the structures and elements of the pools than photographic works that preceded her, such as Nine Swimming Pools (and a Broken Glass) by Edward Ruscha, who not only capture the atmosphere of a time in a place but also introduced conceptual elements such as the allusion to what lurks in the midst of the apparent placidity.

If the empty pools speak of chaos, in the crowded pools, captured with the splendor of the forms, appear an order that promises to last. The illusion of its perfect moment works on several levels: the exterior view can contain objects of the cultural system to which they belong, reinforced by the titles of the works that make the locations explicit and by the parallel photographs of adjoining architectures of bathrooms and dressing rooms, which Caneca captures enhancing its formal qualities, as geometric spaces. In parallel, the surfaces of the swimming pools leave unexpected geometries conformed by water and the elements used as signs, divisions or accessories such as stairs. In certain cases, full pools suggest the invitation to the experience of immersion.

Caneca also remembers the physical sensation of submerging herself to the bottom of the pool and discovering the possession of a moment of her own, where the world was silenced and only her body and water seemed to exist in the universe. The ascent meant returning to the noise of the world: “I quickly returned to the bottom, to the silence, so similar to the maternal womb or to the sensation of being floating in nothingness”. A way of meditation. That is the origin of the video that she titled Immersion and filmed in slow motion, capturing the sensation of fullness of sinking into the water as one who releases the anchor of the world. Some of her artworks not only provide the evocation of memories but the ultimate invitation to immerse oneself in the gift of silence.

In 2017, at the Copacabana Palace Hotel in Sao Paulo, she used five projectors pointing towards the floor of the famous pool to project the image of three swimmers passing through a tunnel similar to the blue of the pool and the swimmers cut in paper by Matisse with a joy who accompanied him to the end. Maritza Caneca covered the blue walls and ceiling of the space and titled the work Immersion in the blue.

In the video Oração, filmed with images of dark oil -this thick, black water- extracted in the ocean, the tones change to yellows, reds, ochres, but again the aesthetics of liquidity transfer the emotion of a dive, beyond of time and space, in mystery. 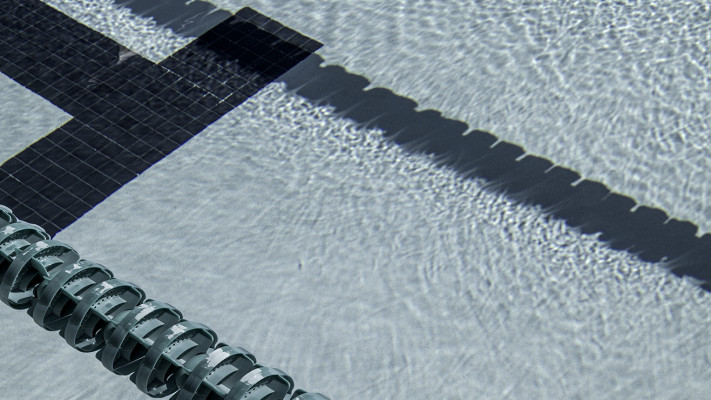 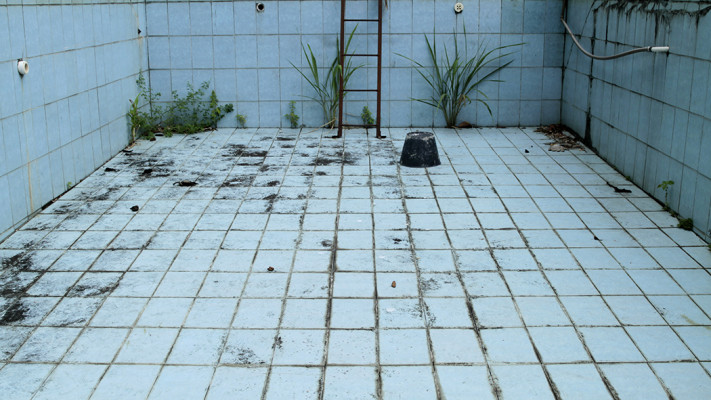 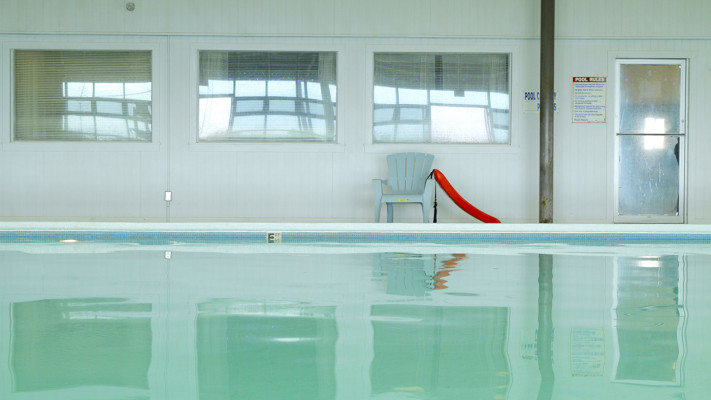 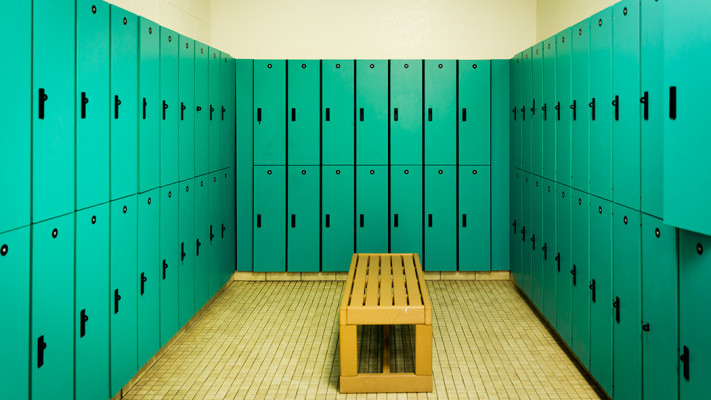 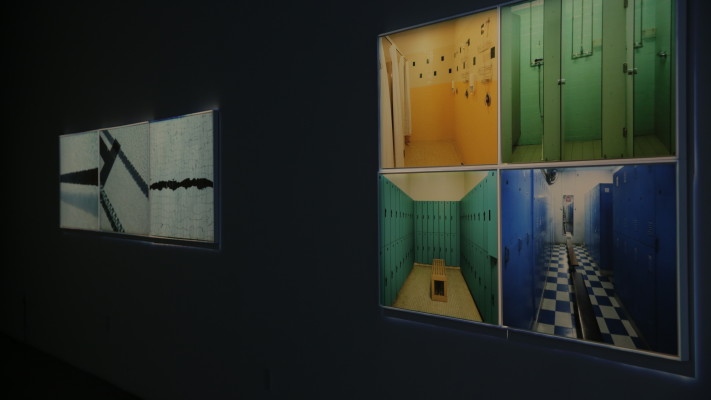 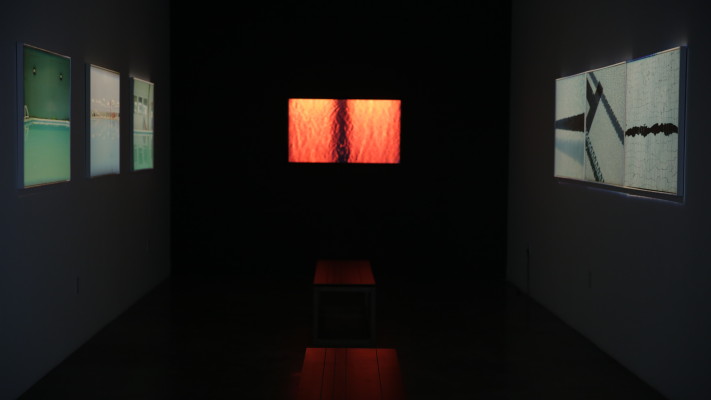 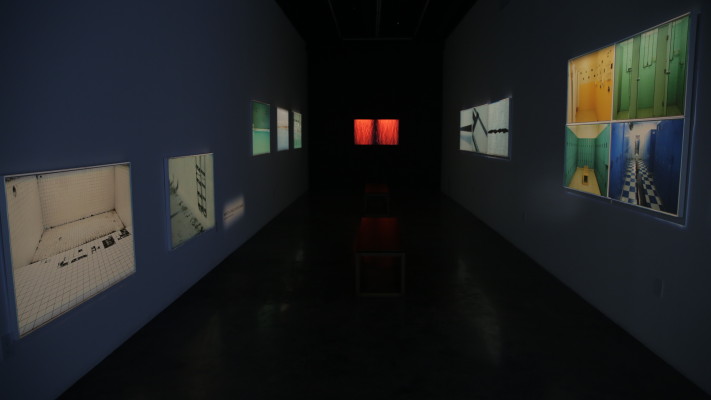 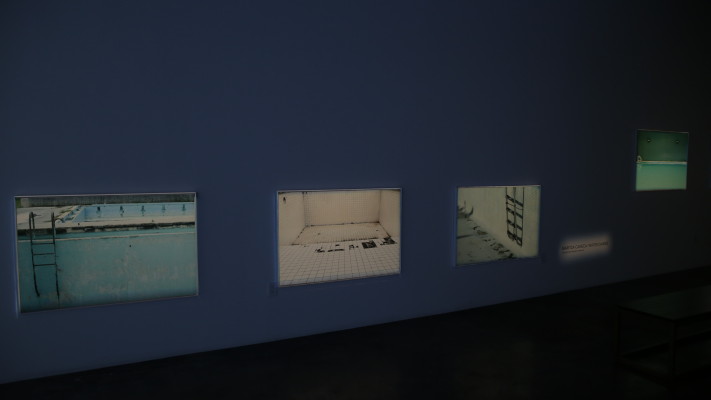 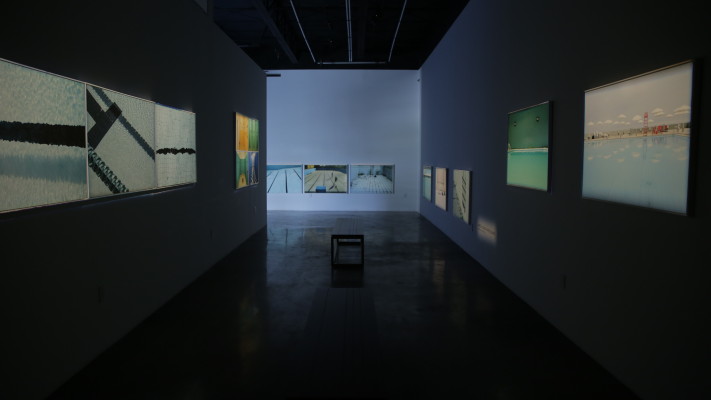 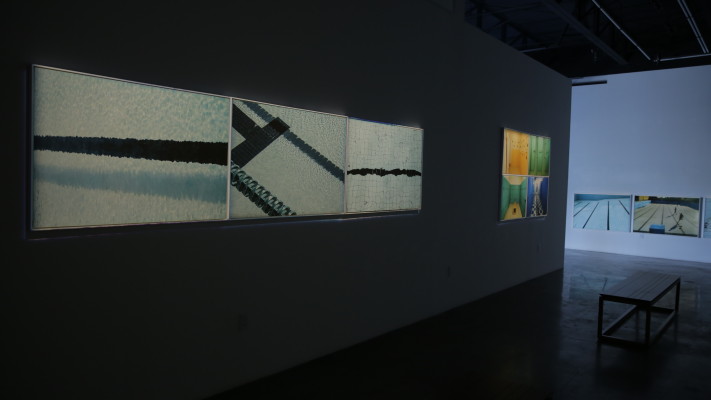 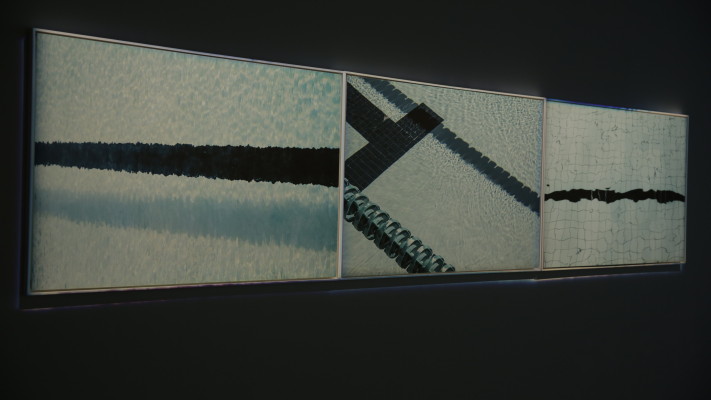 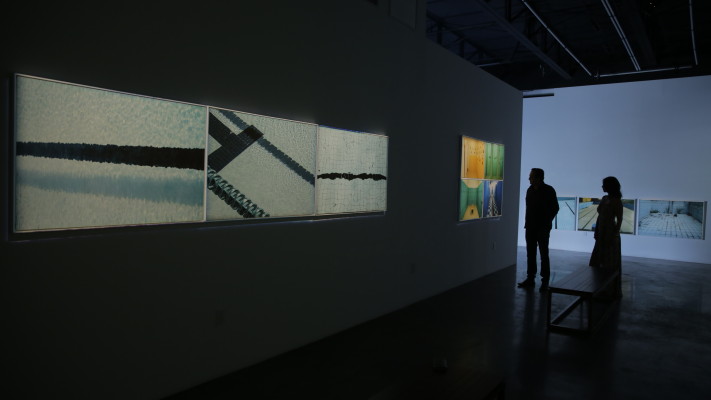 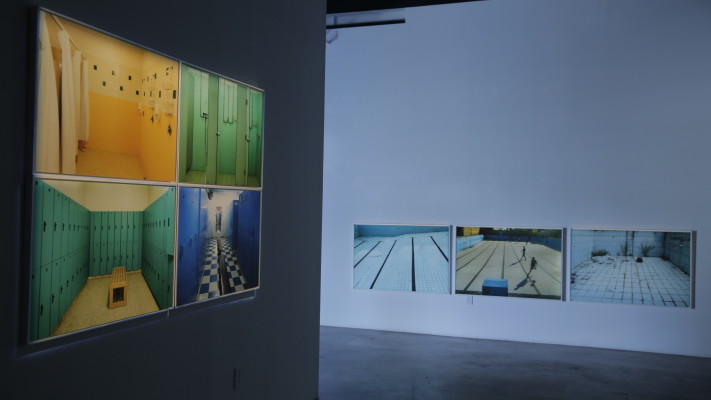 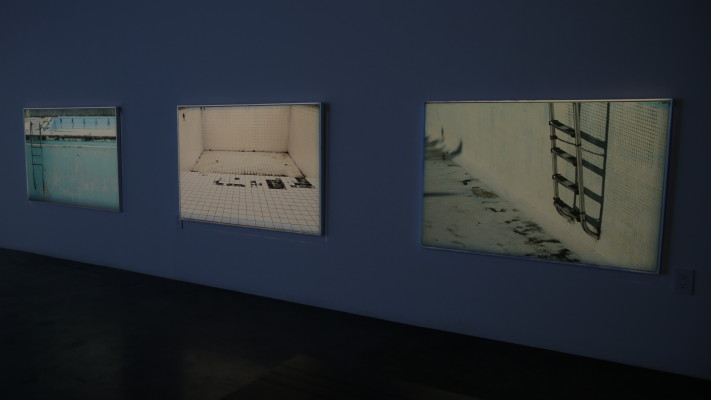 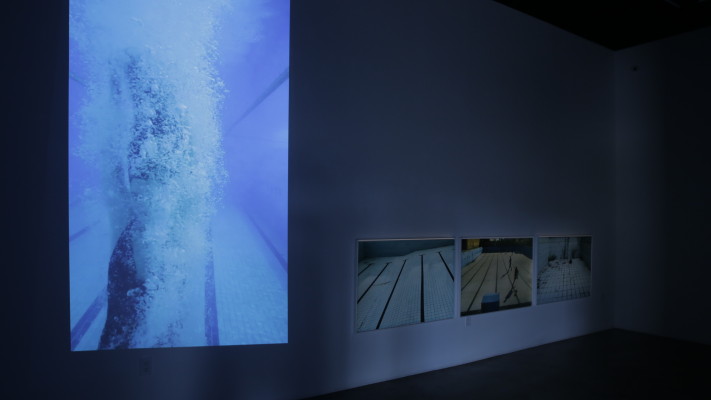 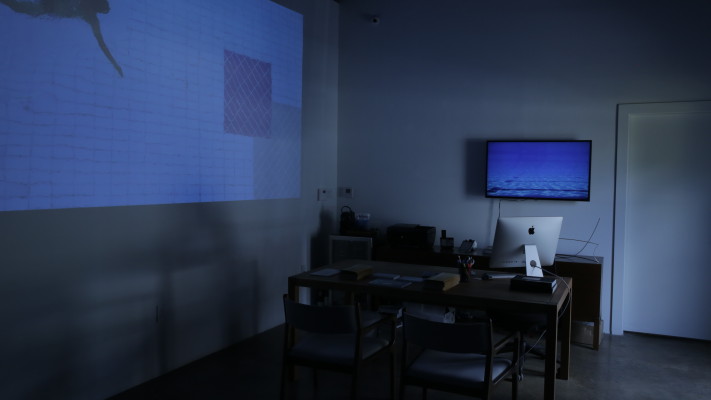