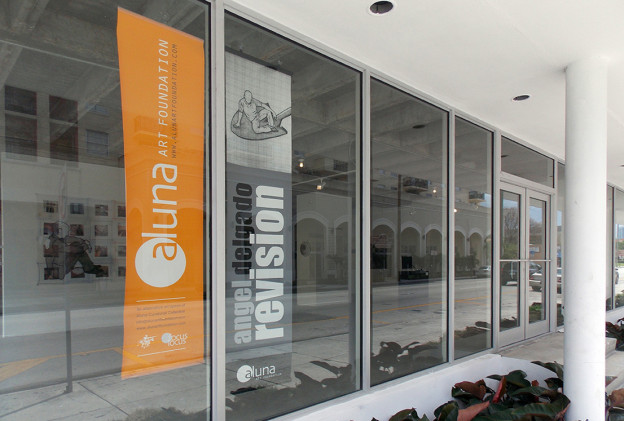 Aluna Art Foundation inaugurates a new headquarter in Little Havana, Miami, on April 18th of 2015, conceived as a space for art and culture to generate new dynamics in the sector and in the city. Continuing its vocation to promote a dialogue around key themes of art and society in the contemporary world, the space of almost 4000 square feet will house three separate independent art exhibitions.

The inauguration will take place with the release of several exhibitions dedicated to the concept of Parrhesia, a term which in ancient Greek meant “speak the truth,”- and the contradictions between censorship and the exercise of freedom of thought in artistic creation and literary. “In Parrhesia -defines Michel Foucault-, the speaker uses his freedom and chooses frankness instead of persuasion; the truth instead of falsehood or silence; the risk of death instead of life and security; criticism instead of flattery; and moral duty instead of self-interest and moral apathy.”

In the first room of the new space, Aluna Curatorial Collective presents “Revision: Angel Delgado”, the first exhibition that centers around truth and censorship, and the first solo show in Miami by this Cuban artist, who at 24 years of age was sent to prison for an act of artistic contempt on May 10, 1990. The critic, Rachel Weiss believes that on that day “the nineties in Cuban art metaphorically began.” This exemplary punishment worked, according to critic Andrés Isaac Santana, “as a warning to other creators” and led to a “certain cynicism, consecrated as an strategic and aesthetic posture of survival in the island”.

Delgado, whose work was deeply marked by this experience, preferred not to title his exhibition with the term “Parrhesia” or to say truth above all else because he’d be lying if he said that his work done in Nevada, where he lives today, would bring danger. “Revision” incorporates sculptures and drawings from the last decade, with media such as soaps, trays or sheets derived from the practices of survival from prison. It also presents serigraphs inspired by an alphabet invented then and large paintings about forms of oppression in a dizzying and globalized world but corroded social indifference.

In another room “Parrhesiastes: The Cutting Edge of Truth” will be displayed, which consists of a selection of works from 25 renowned graphic humorists and editorial illustrators from America, Europe, Africa and Asia, on the topic of censorship and freedom of thought. They answered Aluna Curatorial Collective’s call asking to send their work in a variety of styles ranging from satirical drawing of the press to the creative design of editorial illustration. Many participants have faced censorship in their countries of origin. The shadow of intolerance has many faces: from job loss and ostracism, to the concrete possibility of jail, exile or physical aggression. But even those working in the relative calm of their studies, these “parrhesiastes” –Greek “who tells the truth”– agree that freedom of opinion is very valuable and volatile, a combat – as the filmmaker Stephanie Valloatto would say- which involves everyone, every day.