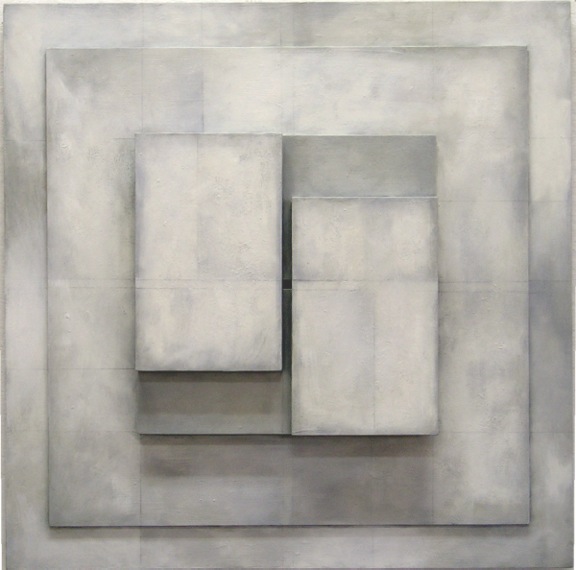 “For everything in which spirit has objectified itself

contains something that is common to the I and the Thou”.

whatever curiosity the order of things has awakened

in our minds, the order of things can satisfy.”

Among seekers, Swiss-born artist Astrid Fitzgerald belongs to the clan of those in search of “the nature of reality” with the conviction that there is a perfect order behind the chaos of appearances, and that its human understanding is possible. That´s why her artwork reflects a convergence of notions that, coming from different fields, ultimately leads us towards a perception of the unity in everything that exists. Knowing the principles from which her art departs, we can attest to how close geometry is to philosophy, physics to the arts, math to spirituality, and the universe to the human mind – and its capacity to create visual abstractions containing its invisible structure. Her approach to the possibilities of art media forgoes the paradoxical: She uses solid matter, for instance wood as a support, to suggest the immateriality of things (there is an infinite emptiness between atoms) and the illusion of our vision. She is also able to fuse art movements that we though irreconcilable.

The title of her exhibition at Art Nouveau Gallery “Emergent Symmetries” echoes a term coined by “scientists involved in trying to merge quantum mechanics, relativity and space-time theories,” she explains. “It turns out that the mathematical number Phi (1.618) relating to the Golden Ratio may well prove to be the way to an integration of the various theories”. The philosopher Richard Geldard – her husband – comments: “one thinks of the emergence of forms manifesting from mind, the intuitive patterns from minds connected to and emerging from universal forces.”

The development of Fitzgerald’s artistic career, which in fact began with textiles (primordial geometric designs served as a matrix for her future abstract paintings, tridimensional works and constructions) embraces the universe´s structure and its order gives cohesion to her life and art. One of her books, titled “Being Consciousness Bliss – A Seeker’s Guide”, 2002, “discusses the current human condition–the “sleep” of ordinary life – and how we may begin to wake up”.

Before discussing the way in which her artwork reunites antithetic artistic movements, it is important to highlight how close she is to thinkers such as Ernst Cassirer, author of The Philosophy of Symbolic Forms, who looked to the connection among separated bodies of knowledge such as religion, sciences and arts. Also she reminds me of the search of the hermeneutist Wilhem Dilthey and of the idea of a mind science correlated to the imaginative metamorphosis that is present in Fitzgerald´s artworks. Her geometrical abstractions make visible the invisible forces that animated our existence by activating an unusual perceptual process in us. Keeping in mind the quest of those thinkers and the notion of truth according to Hans George Gadamer, we could also find in her works the pleasure of play and “the joy of knowledging” in a way that expands our personal experience of the world.

Going back to her formation, there was a turning point at the end of the 70’s, when she took a course on sacred geometry at the Metropolitan Museum giving her the structure to find her alphabet of the infinite. If before Astrid used Goethe’s color theory, she now shifts her attention to the Golden Mean (GM) projected in geometric forms. But in the same way in which she seeks a personal experience of spirituality, she makes free use of references and violates the rules of her masters while drawing from their legacy. Mondrian – who was also a spiritual seeker – would not have accepted her use of rich gradations of color, the optical play of superposed triangles and rectangles. The technique of transparencies not only presents the viewer with multiple layers of surface – breaking with the plane representation – but also creates the illusion of converting the solid support into an ephemeral form.

None of the followers of Neoplasticism, De Stijl or the Suprematism movements, that uses the primordial geometric forms to convey a type of representation distant from the objects of the world, would accept the way in which she merges the roots of European geometric abstraction, not only with the vision of Joseph Albers, but also with the material sense of Informalism derived from Antoni Tapies. Her surfaces are a place for the sensuality of the tactile.

The paradox is also present in the fact that while she seeks to induce a kind of subtle contemplation or even an evocation of the immaterial, there is also a celebration of the concrete surface as well as the existent astronomic or even architectonic references. Alongside her career she has represented the distance between celestial bodies, or ancient buildings that function as ritualistic architectures. In her large constructions the presence of craftsmanship using Birchwood Golden Mean rectangles reminds us, as she affirms, of the legacy of the Shaker movement.

Astrid Fitzgerald also worked with the shaped canvas – previously explored in the south of the continent by the Argentinean Rhod Rothfuss and the members of the MADI movement who follow the possibilities of playing with the frame´s rupture. Far from the manifestos of the avant-garde of the XX century, we are facing a time where the dialog with the past is as vast as unlimited in the freedom of enlivening it in what we can call “original” not because it is new but because of its authenticity.

“Emergent Symmetries” includes one of the most powerful artworks of her entire career, Knossos II, an oil on wood, a labyrinth formed by a set of overlapping GM rectangles with gradations from light green to black – a visual journey that challenges the viewer. The masterful use of color creates the illusion of intersections and nonexistent courts and in the center of the building, named for the mythical palace that the architect Daedalus built to imprison the Minotaur, a white cuboid became the magnetic center that connects the piece to infinity contained in a vacuum.

Less complex in its composition, but also capable of inducing an infinite perceptive game, “Paros IV”, is named after that island linked to the history of sacred architecture in ancient Greece, and reflects the way Fitzgerald is linked to the remote source of cultures. The four overlapping GM rectangles form an installation piece, between painting and sculpture. The game created by the gradations from light to deep blues and the lines forming rectangles and irregular triangles causes an incessant mobility in one’s gaze. Depending in where the viewer is standing, there is a constant change in the perception of the planes.

Such mobility, connected to the notion of a changing universe, to the play of possible combinations or positions of the basic structures, is even stronger in “Pithagorio II”, one of the works that invokes the name of the ancient geometer, mathematician and philosopher who discovered the golden ratio. This piece which rejects the notion of frame is constructed from two GM rectangles and irregular cut circles seems to capture the moment of a position that could change at any moment. It is in this imminent movement which hints at the universal where its power lies and ultimately, Astrid Fitzgerald’s aspiration provokes “a state of extreme alertness” that cannot be separated from the purest appreciation of the perceptive instant.