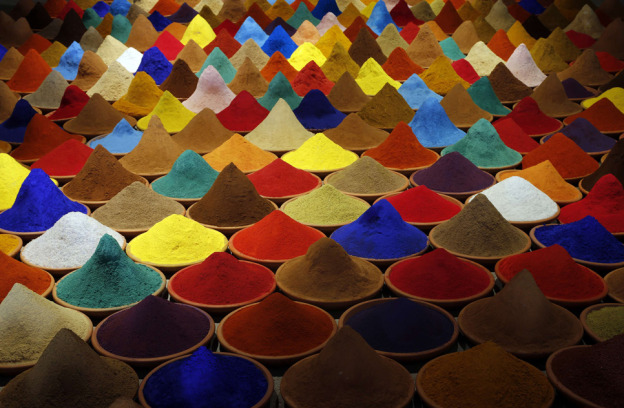 Sonia Falcone and her unified cartography of the world

Field of Color, the work presented by Sonia Falcone (Santa Cruz, Bolivia, 1965) at the Biennial of Montevideo in the ancient church of Saint Francis, is a minimalist installation in its repetitive structural composition. However, instead of the cold and neutral materials used in North America, she uses an organic material containing the invisible weight of centuries and a symbolic millenary memory: spices. Its presence goes back to the holy literature and its search generated not only fantastic stories and huge wars, but also changed the course of history at the moment of the union between the Old and the New World.

Achiote, chocolate, pepper, clove, cumin, anise, coffee, curry, mate, wilkaparu, cinnamon, nutmeg, make, with other substances cooked and ground, the material of this multi-sensorial installation made with shining colored powder. Terracotta, indigo, red, green, white, yellow, flesh-colored, pink, fuchsia, purple, orange, ochre, blue, are contained in identical round containers and rise up in conical small mounds. They create in its perimeter an irregular hexagon superimposing to the ornamental ground style of the high Saint Francis cathedral, where the aroma spreads.

In this way, spices that unified the two continents by encouraging the colonizers travels’ in a world, which denied its shape, constitute a crossed references universe. They time travel and converge in this installation that contains the moment when the geographical earth’s vision became full. But it offers overall an esthetical banquet – as olfactory as visual – of diversity.

The 88 argil recipients that contain colored powder spices unify oriental and occidental gastronomy and push to imagine, like a unified whole, the culinary wealth of the entire humanity. These are nourishing substances taken in far away earth’s points, placed like an appetizing visual dish by mixing infinity of aromas using the sculptural power of smell. By this way it transforms not only the surrounding space but also the perceptions limits of who comes in this Field of Color.

The spectator eats with eyes, smells with colors, wishes to put his hands in the powder ground and discovers, in the repetitive recipients’ style rising up from the circular basis on the ground to the horizon of his sight, the idea of an immensity wonderfully contained in Falcone’s banquet.

In order to reach the synthesis offered by Field of Color of learning about alimentary oriental and occidental cultures, this very beautiful set of popular culture nourishing the world’s palate, Falcone used the travel as method in markets at the boundaries of the world, where she took many essences, looking for the spices’ colors and smells variety. This way she bought in far away cities like Bogota, or Mexico, and la Paz, this colored spices aromatized, placed in repetitive models with a conceptual goal: put together in a single complete work, without hierarchy, the spices coming from different continents and traditions, so that the 88 recipients (symbolic number of eternity and infinity hold in even the smallest seed) work like an universal culinary culture archeology and open a limit to imagine the earth’s unity. “Once the sensorial experience disappeared – said the artist – I’m waiting anyone to continue searching in himself, so that the capacity to synthetize the experience would be what remains”.

Her method reminds the Spanish Miralda’s one, pioneer of cuisine introduction in contemporary art, which is for Umberto Eco, the creator of a big festival in contemporary societies, which “lost the banquet’s sense, but kept a dark attraction for it”. Falcone highlights this attraction, makes it similar to a color’s celebration, brings to light and extends on the floor in a olfactory-tactile map which takes origin in the millenary memory, and makes of the palate’s learning another way of drawing a unifying cartography of humanity.

The curator Manuel J. Borja-Villel says that mass culture’s purpose isn’t to represent the world but to consume it. However the alimentary consumption of Field of Color transcends its own materiality, its own sensuality, the manner to evoke all the senses, and configures finally a universal space for contemplation of creative beauty of every culture, expressed in the art of growing the pleasure offered by food.

In this way there is a re-sacralization in her sensual installation making any single substance transformed in vision’s material, use itself to come back ritualizing aliment’s power as support of human species, as a proof of its transformation power, of the satisfaction of civilization who run through centuries to discover ways to delight palate, through its use in a minimalist artistic installation built with cooking materials, with everyday substances, so close to life celebration as the show itself of popular market with its aromas’ and colors’ banquet.

In this banquet of a time, which forgot its unifying capacity, Sonia Falcone rediscovers the visual, olfactory and tactile power of the aliment and uses the seasoning of life, the universal condiments rising up as holy cones in recipients to display – beyond the need use – a renewing vision of the earth’s bred. Spices are the manner of rebuild the rainbow, with its ancient pact symbol, and displaying among the infinity of aromas and colors, a strong image of rapprochement of cultures.

If Daniel Spoerri included in his work food’s remains or maps of objects founded on a table at a given time to draw a diary of his journey of life and artistic, Falcone makes in this beautiful installation with perishable materials, a work which breaks the separation between kitchen and museum, between art and life, between minimalism and the millenary learning of the world gastronomy, supposing however the creation of a colors’ smells’ and tastes’ map which attracts an earth as different as unified. It’s exactly in this sense that overlaps the actual map of confrontations and breaks, by building a future’s invocation, almost a prophecy of the unity and celebration, a nourishing vision for another future.

In this way, even if contemporaries use to identify themselves with a way of haunting the shapes of their time, this one works for a contrary way: gathering its richness and makes a light feast, a smells and colors banquet in the way of a drown map on existing overlapping an uncertain time full of divisions and shows another way to occupy – as a celebration – the earth’s space.