The 20th century was marked by the staging of enormous utopian social experiments, whose changing scenarios encompassed parts of the planet as far from each other as icy Siberia, surrounded to the north by the Arctic Ocean, and an island in the Caribbean Sea located south of the Tropic of Cancer, to mention two geographic extremes. Without exception, the “isms,” especially the various systems that embodied new modes of political absolutism, but also, in another way, late capitalism itself, led to dystopian realities. After the fall of “the great narratives” of history that nurtured classical art and, to a great extent, modern art, as stated by Arthur C. Danto in his classic book, After the End of Art, contemporary art can harbor a “historical consciousness,” but it has shed the weight of these narratives and the sense of belonging to what they represented (2). History is “our lost referent: that is, our myth,”(2) and this experience defines postmodern sensibility even in places where the promises of modernism were never carried through. It is precisely in the middle of the so-called “desert of reality”(3) where fictional narratives about the future emerge with the greatest force, like science fiction, and the sagas of Orwellian inventions or heirs of the Brave New World that warn of the imminence of a lurking common horror. But while skepticism dominates vast fields of reality, it is in the realm of artistic fictions where in this time void of great stories a space can be built—as Dagoberto Rodríguez (Cuba, 1969) decisively does in the exhibition Crystal Planet—to address, with a form of lucid invention, the dilemmas of the present. A space to face the winds of political anomie and ecological destruction and, above all, to finally approach what Fredric Jameson calls “the true function of utopia,” which “is not to present a political program, but to break/interrupt the future and open it up for us again.”(04)

Instead of the “white cube” as a reference, Dagoberto Rodríguez uniquely develops—in this proposal conceived almost entirely during the outbreak of the pandemic—the aesthetic power of his inalienable social imagination to create within a vantage point from which he observes history without the weight of great stories and with a humorous intelligence that stimulates the criticism of power without losing the ability to shudder at their violence. He also welcomes in his vision the echo of other utopists—inventors, philosophers, or scientists and writers such as Arthur C. Clarke, with whom Stanley Kubric worked for the filming of 2001 Space Odyssey—who, without lust for power, dreamed of enlightened worlds for all. The utopian architect Buckminster Fuller even imagined eco-cities covered by protective domes. From his Geodesic Dome (1967), come the glass domes, as tough as they are fragile, of Dagoberto Rodríguez’ watercolor, Planeta (2020). He painted it in the midst of his isolation in Madrid as an invention that, surpassing in his visual fiction the atmosphere of contagion, and political and economic chaos, offers a creative response to the most primordial human need: refuge (5). In some way, all the works gathered in this exhibition contain the friction of the darkness of history and the poetics of what has not yet taken place, but which subsists in some realm of human thought. In Crystal Planet, more than ever before, there is the realization that while we drift in this “spaceship,” as Fuller called the Earth, in an infinite universe, we need to ensure our survival.

This personal exhibition, curated by Aluna Curatorial Collective for Piero Atchugarry Gallery, is the first in Miami by the artist, who is a co-founder of the Colectivo Los Carpinteros (1992-2018). It is also a project that marks a crucial turning point in Rodríguez’work, including the construction of the central piece: a large interactive tunnel, simply named Túnel, which he designed throughout 2020. The piece allowed him to symbolically cross a year that transformed life on earth, and contains in its conception the poetics of that extreme moment in the Stanley Kubrik film where the characters consider the urgency of saving, more than knowledge and technical mastery, that which makes them human. The title and the works exhibited in Crystal Planet are a measurement of our vulnerability and activate various warning signs that in some way interrupt the vertiginous nature of a critical time. Rodríguez uses, but simultaneously transcends, the deconstructive strategies of parody and play, of humor and political irony, and ends up building a scenario that proposes an immersion in the possibility of imagining alternate futures.

In his video Geometría popular, Dagoberto Rodríguez resorts to multiple visual perspectives and, combining the classical figures of abstraction with the perfect—and controlled—formations of great gymnastic events and with the chaotic moments of a performance lead by a confronting crowd, he unmasks, but in a way also deactivates, the tribalism of a world divided into polarized factions. In the fictional watercolors of his bunker’s series Rodríguez takes up the monumental design of complex architectures particularly inspired by fascist dreams of dominance and surveillance. In those created in 2020 for Crystal Planet, there are elements equivalent to a transmutation of these panoptic architectures into spaces of “paideia”— fictional places for shared learning, and/or communal ways of living out of the shadows. He also draws fictitious geographies in which beautiful masses of broken polar ice float like blue monoliths built with Legos, recreating—but also trying to freeze—that image of warming that functions as an anticipated semiology of extinction in the age of the Anthropocene.

In one room, the exhibition faces the dilemmas of human societies doomed to anomie. In another, it displays landscapes of sinking that constitute a space of ecological alert for the “oikos” (6) — that shared house that is the Earth, reminding us that we inhabit a Crystal Planet, and that it is increasingly urgent to find ways of living together that not only protect our species, but also prevent the extinction of other kingdoms. Transgressing the labyrinthine logic of the tunnels he has drawn for years with perfect complexity—but also as spaces which, behind their beauty, harbor the terrible possibility of trapping you within them—, Dagoberto Rodríguez invites us to enter his Túnel. This time, there is an exit, not only within the exhibition space, but within the transit that we can fulfill by daring to imagine: “Think for example, ─he says─ of a world in which it would be possible to be happy where you are born.” In Crystal Planet, Rodríguez himself has dared to evoke other modes of utopia that disarm the trap of the great narratives and he gives himself the task of returning to his “true function”: “breaking/interrupting the future and opening it up for us again.” 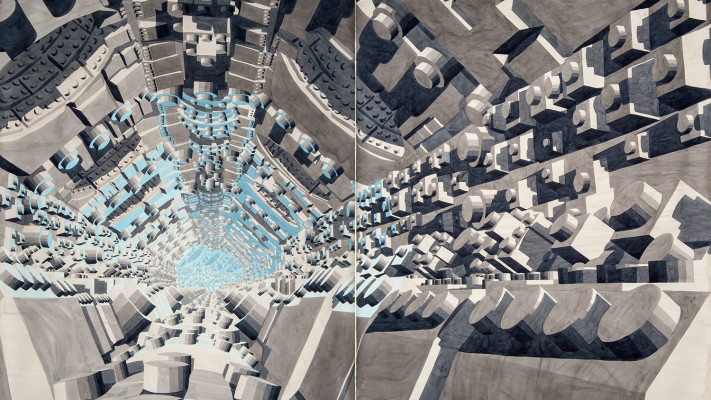 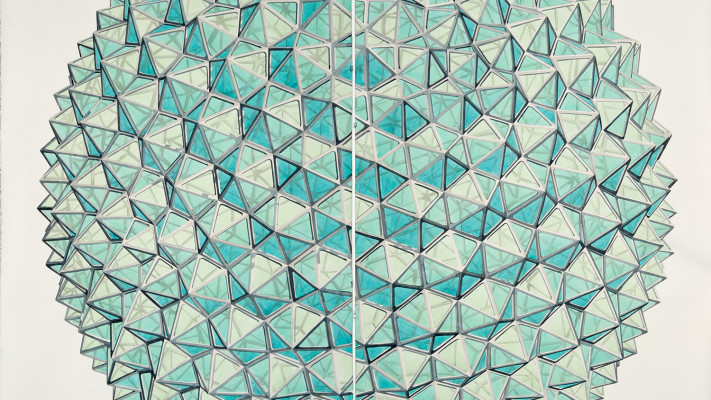 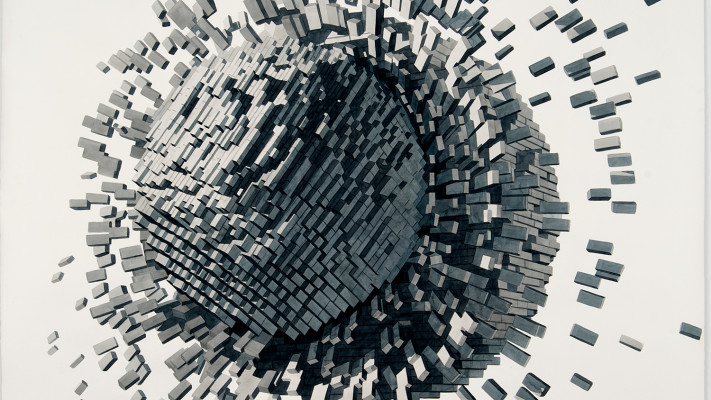 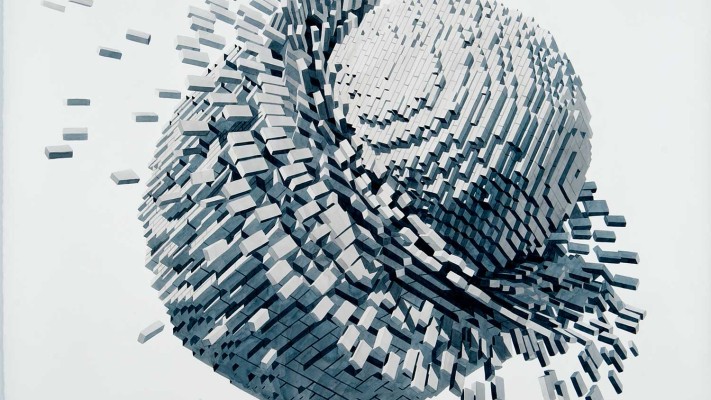 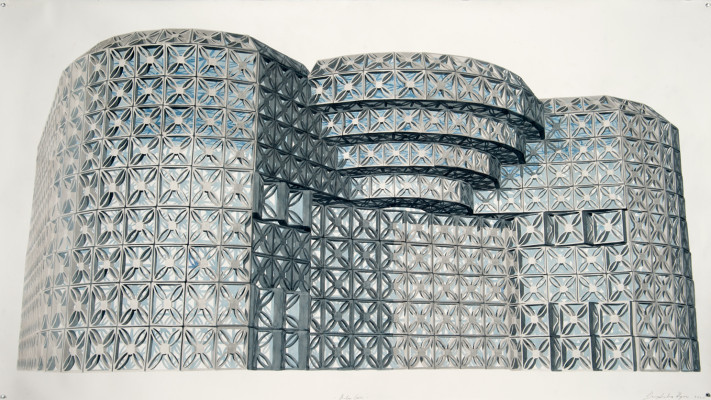 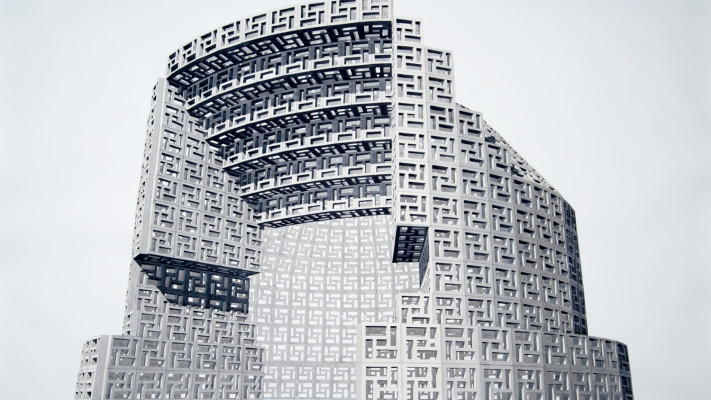 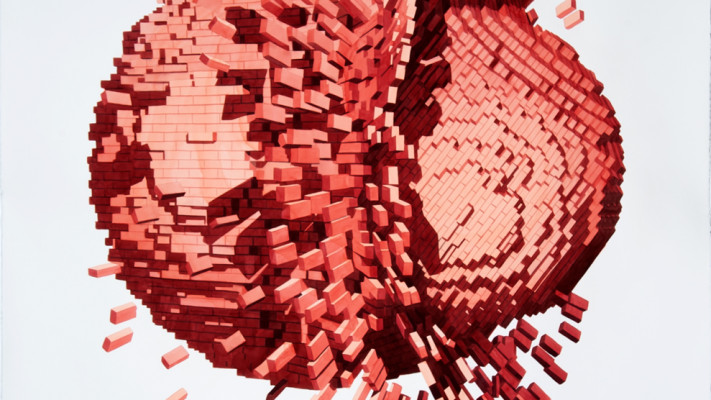 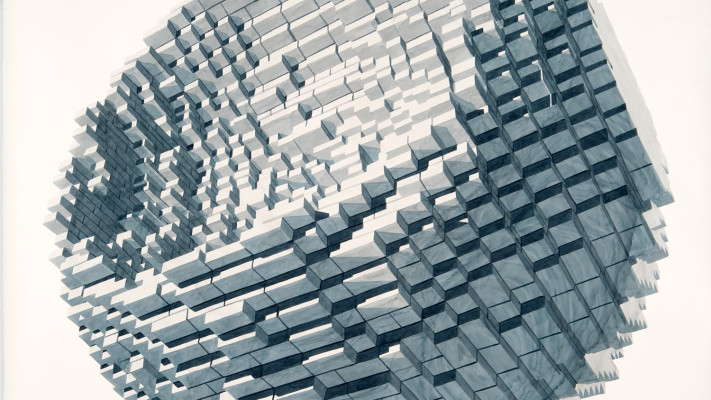 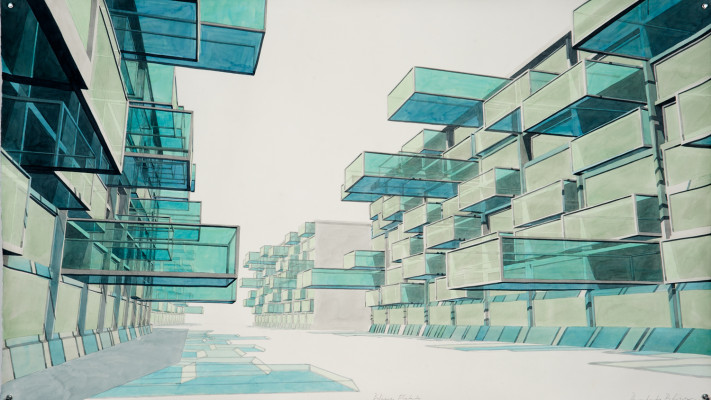 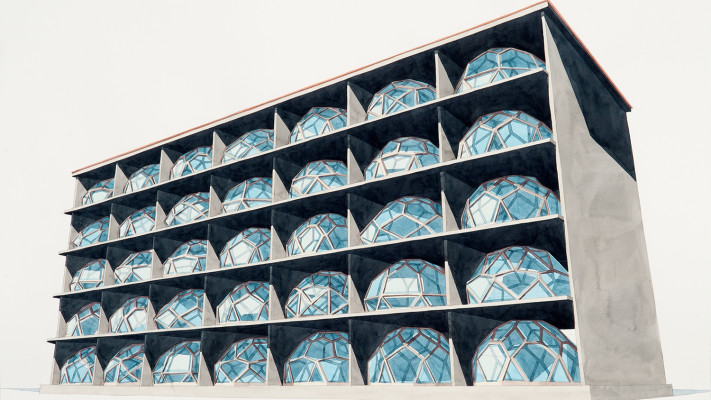 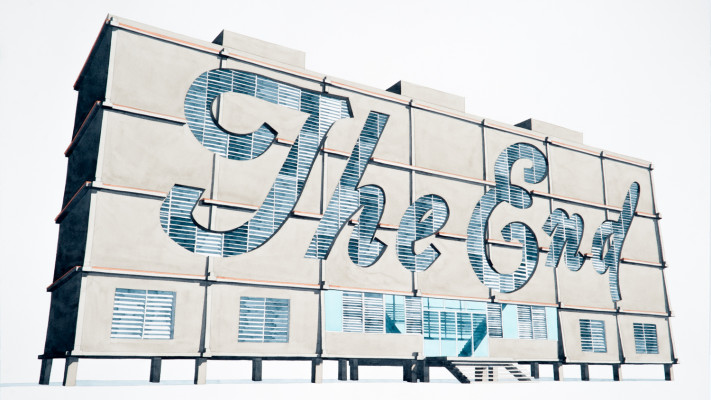 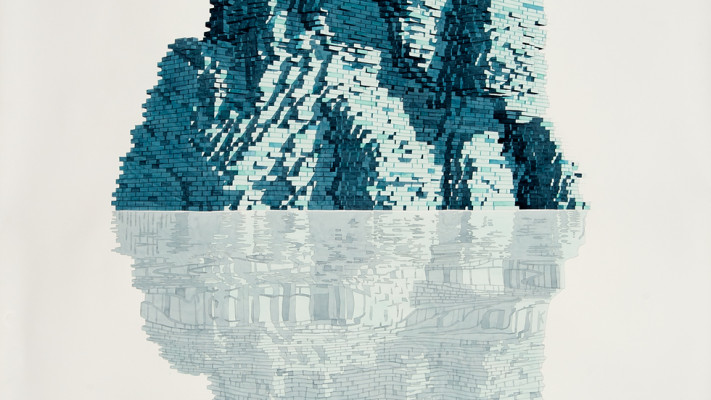 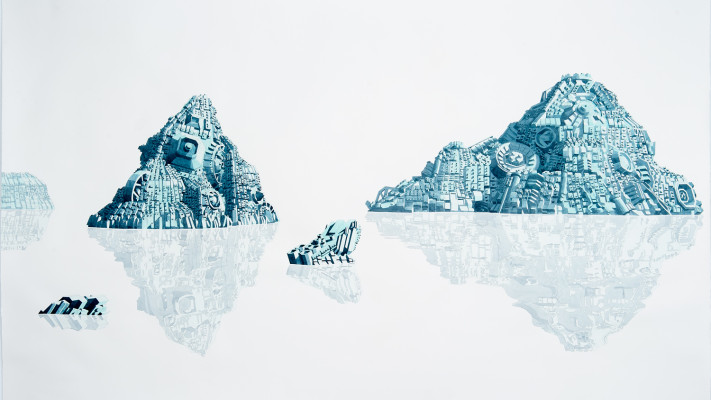 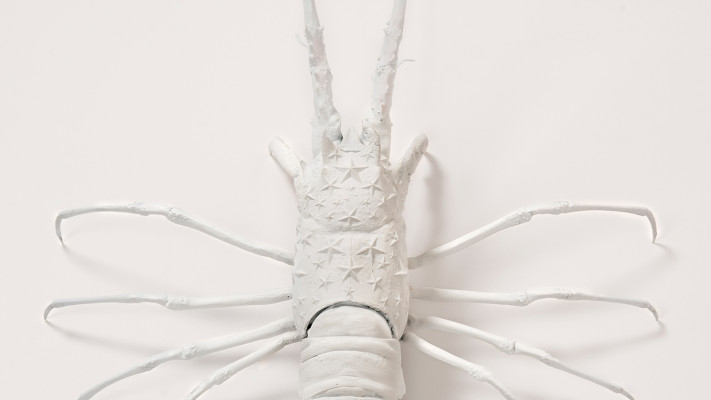 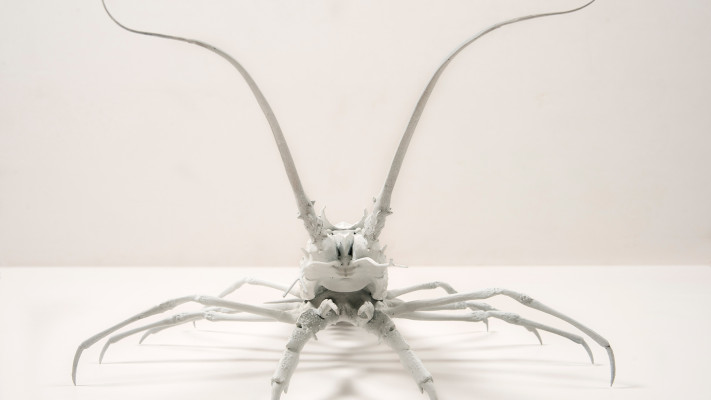 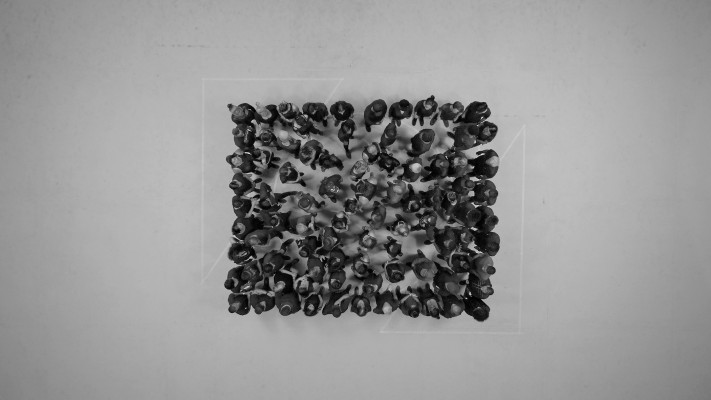 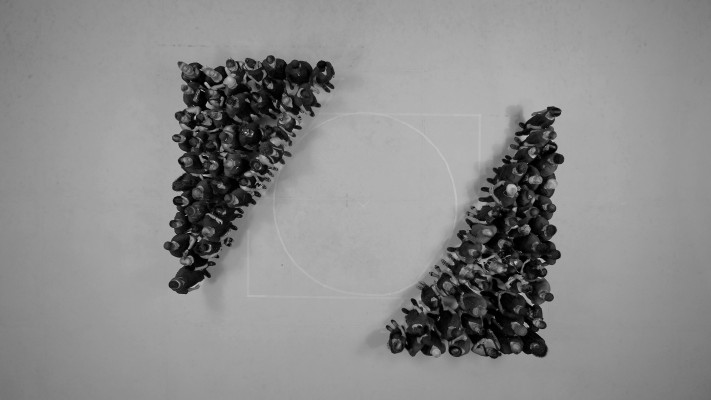 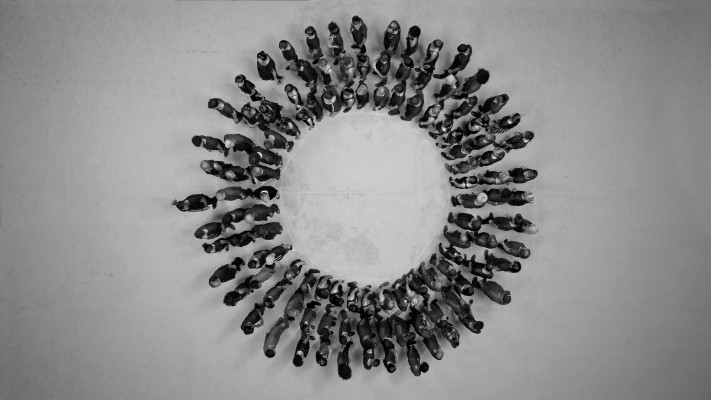