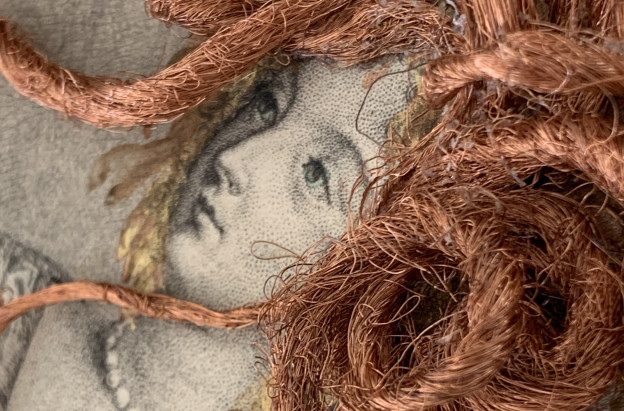 AMERICA WEAVES
One hundred years after the founding of the Bauhaus, which considered the artist “an exalted artisan” and called for erasing the boundaries between art and crafts, America Weaves gathers a group of artists that expand the borders and possibilities of the action of weaving, embroidery, and interlacing throughout the entire Americas, from Argentina to the United States. Some works are formal inquiries into the possibilities of the medium; others merge different epochs, resorting to the technique of palimpsest; yet others pose critical and conceptual appropriations of different sorts. Making art with textile materials is, ultimately, a possibility that is as playful as it is culturally vital.
Curated by Adriana Herrera, America Weaves shows how, since the times of prehispanic art, our continent has woven times, history, visions, and worlds.

In the centenary of the Bauhaus, which considered the artist to be “an exalted artisan” and launched its famous call “we must come back to craftsmanship!”, erasing the limits between arts and crafts, America Weavesgathers artists who expand the borders and possibilities of art with their textile work. Featuring creators from Argentina to the United States, this exhibition proves that America has been a privileged space for the creation of contemporary textile art. Artists in the show interweave not only materials, but also the past and the present, forwarding visions of the world and ways to account for it.

The Latin term texereis the root of the Spanish word “tejer” (to weave). It is also connected with the action of interlacing or weaving and originated other key terms related to textile art such as text, hypertext and context. The wide range of labor and thedifferent materials of the works refer to this vast history and meanings. Artists not only weave threads, cloths and fabric, but also metal- a technique partly nurtured by the legacy of native cultures.

The exhibition includes Amazonnia, 2004, a late work by experimental poet and contemporary art pioneer Jorge Eduardo Eielson (Peru, 1924—Italy, 2006). It was created 40 years after the spring of 1964 when he experienced the revelation that brought forth his extraordinary works with knots: “…in a dream (just so, like in the time of good dreamers) I saw for the first time works made with knotted fabrics which I found of great beauty.” With a powerful tether in black, yellow and terracotta evocative of the mnemonic system of the Incas—the quipu—Eielson invokes the landscape of South America and its ancestral peoples. For Álvaro Gómez Campuzano (Colombia, 1956),one of the first men to embrace textile art in Colombia,weaving is “the primary structure of everything that exists in the Universe.” Hiswork is a continuous celebration of the medium’s expansion possibilities. He carried out Sombra, 1982, with a horizontal loom, building an abstract weft through meticulous, minimalist repetitions, using household materials such as wool and leather. The installation is designed so that the piece is detached from the wall and thus the projection of shadows completes its sculptural character. By closely watching the details of the weft one can appreciate the meticulousness with which the artist builds this beautiful order, while its tri-dimensional projection reveals the freedom necessary to expand his weaving into the physical and symbolic space of art.

Dibujo No 7,1978, by Gego (Gertrude Goldsmith, Germany, 1912-Venezuela, 1994) is made of assembled or interwoven steel wire. This pioneer claimed weaving as the main structure in her practice. Through lattice she infuses an organic and vital character to contemporary abstract art. The double-faced piece Eclipse solar,1980, is made by the also pioneer Stella Bernal de Parra (Colombia, 1933), who is part of a generation of women formed in Bogotá, Colombia under the influence of Bauhaus. In this piece, she uses wool and copper to interweave the day and the night. Parra pairs humanity’s searches to conquer space with the astrological memory of pre-Columbian cultures. Her tri-dimensional tapestry Mi Cristiano, 1973, out of virgin wool, was created during a workshop with peasant women and incorporates elements from their traditional garments, as well as the aesthetics of popular culture. In Campanario,1971, she turns the woven threads into architectonic matter. Also of historical value is Untitled (La tira),by María Angélica Medina (Colombia, 1939) —a strip woven with cabuyaor pita rope. This piece is an antecedent of her conceptual works, where Medina carried out conversations with people as she weaved in public. Assembled with two needles, it is conceived as a woven passageway. The artist installed it in the mountains and documented her action with photography.

The remaining works included in America Weaves have been developed during the last decade. The photograph by Tatiana Blass, Penélope, 2011, also documents an intervention and performance in a landscape. Several of the artists in the show use textile techniques such as embroidery and/or hand sewn appliques in order to rewrite history and to deconstruct narratives.  Pip Brant, a professor of textile art, recreates scenes from the American Civil War in her series Battlefield Re-enactments, which proposes, as she states, “a story of this rotting past, further decomposed with the act of embroidery.” Marcela Marcuzzi intervenes with textile materials original engravings and texts of the early twentieth century that tell veiled stories of the lives of women aristocrats in European courts. Luis Arroyo creates cultural cartographies on used-up fabrics. He embroiders, knits together and finally deconstructs references that range from those of Latin American punk to great names of creative women in History. The Guerra de la Paz Collective approaches contemporary reality in its iconic work Atomic, 2009, made with secondhand clothing. It is a call to take shelter from the irrational violence that threatens humanity. In Migración y delirio, 2019, Juan José Olavarría lays out a map that evokes the silhouette of Latin America with a very personal embroidery style. He uses a piece of cloth intervened with blood and dust as a metaphor of the traces of those forced to leave their homelands.

Ana Isabel Díez embroiders landscapes on plastic fences. She employs stitches in the shape of X and Y, like the chromosomes. Liene Bosque builds a hammock out of coffee sacks, thus inserting the agrarian world in the museum. In different ways, both pieces conjugate the public and the private spaces; also geography and culture. In Carrie Sieh’s embroideries of Miami´s urban landscapes, the artist reflects concerns on the social and environmental imbalance that leads to gentrification, and simultaneously disturbs ecological well-being.

Another group of works are sophisticated formal elaborations.  This is the case of Guido Yannitto’s research on “the possibility of a square”. It is also true of the minimalist canvases that Frances Trombly embroiders over the original canvas, in a meta-artistic exercise. She approaches invisibility, as well as questions related to the self. While some works return to history, some others raise ontological questions. The abstract traces in the tapestries of Mexican artist Magali Lara constitute an alphabet befitting to express internal searches. She is one of the strongest pioneers in this medium that posed feminist inquiries.

Chiachio & Giannone, and Sonia Falcone intervene found textiles. The duo seizes materials like old pillow cases and intervenes them with elaborate, hand-made embroideries with cotton thread. They thus alter “the very limits of configurations” and the demarcations between the menial and the artistic worlds. In the Palimpsests Series, Falcone creates her own language. She inserts multicolored iconographies onto the fabric of ancient aguayos in which indigenous peoples lay out the signs of a sacred geometry that we can no longer decipher. Reactivated by this dialog between times, the works can visually move us. Simultaneously, Aurora Molina painstakingly embroiders two-sided versions of her own embroiderer hands, perpetuating the creative act on the fabric. She uses a loom that she made in Guatemala, working with artisan women from the Trama Textil collective. Andrés Bedoya’s Untitled (Hair), 2016, is a black, abstract work containing an infinity of ciphered stories. It is both a technical and ritualistic piece. He builds

it with cloth and human hair evocating ancient mortuary cloths and also making reference to the function of textile in the rural Andes where men “often represent animals, beliefs and experiences”. Raquel Schwartz used hundreds of cassette tapes to weave an enormous work with two needles. The piece encompasses not only sonoric memories in disuse, but the metaphor of time in feminine labor. Miguel Aguirre interweaves the technique of popular tapestry from Peru with the pop iconography of the Coca-Cola letters as well as the echo of the history of conceptual art in Latin America.

Lastly, the exhibition includes a group of pieces sharing a particular, ludic nature: a celebration of the richness of textiles and their cultural hybridity, as well as a language of freedom and inventiveness. That is precisely the spirit of Basil Kincaid’s work: Quilt: A Dance to Summon Spring, 2019 or Alex Trimiño’s sculpture built with elements such as a stool, fabrics and light tubes. It is also true of the tri-dimensional piece assembled by Diana de Solares with shoelaces and the multicolored fabric Algo que siempre se escapa, where Yannitto glued wool to canvas. America Weaves celebrates such myriad of languages and possibilities, threads and textiles to display countless stories and references throughout the entire continent.

About the Curator:Adriana Herrera earned her Ph.D. from Florida International University with an interdisciplinary dissertation on art and literature, formulating the concept of “extreme fictions” (2014). In 2011, she cofounded Aluna Art Foundation along with art historian Willy Castellanos. Among the exhibitions that she has curated are: Ramirez Villamizar: Sacred and Proper Geometry,Durban Segnini Gallery, co-curated by Nicolas Bonilla (2017-2018);Sonia Falcone: Life Fields, an  intervention at Palacio Nacional of Ajuda, Lisbon, (2017); The Global South: Visions and Revisions from the Brillembourg Capriles Collection, co-curated by Adolfo Wilson for Mana Contemporary (2016); and Jorge Eduardo Eielson. The Other Side of Languagesat KaBe Gallery, 2016. 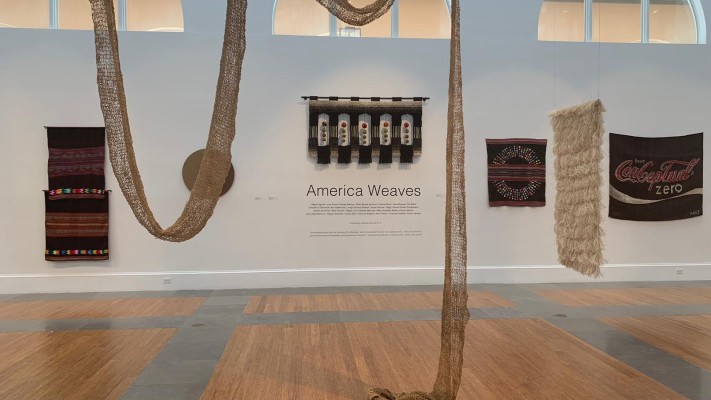 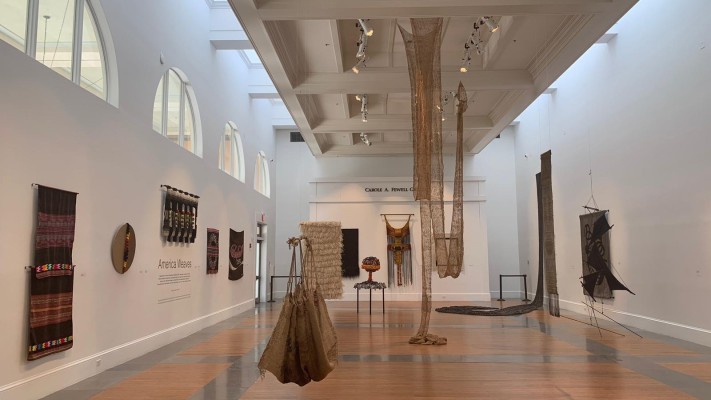 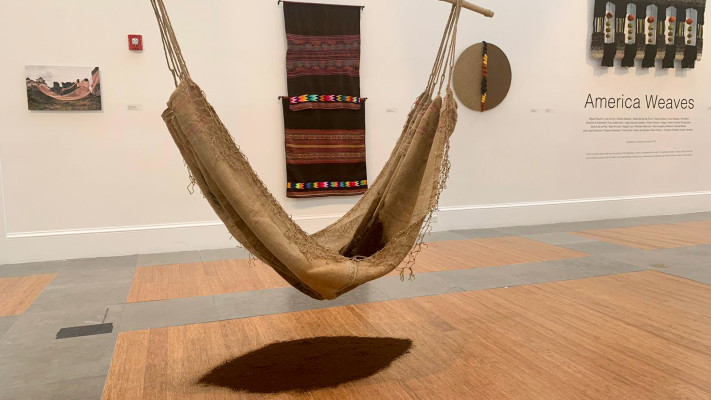 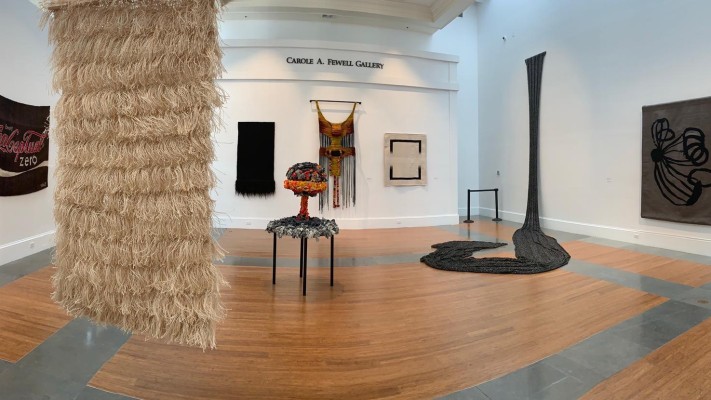 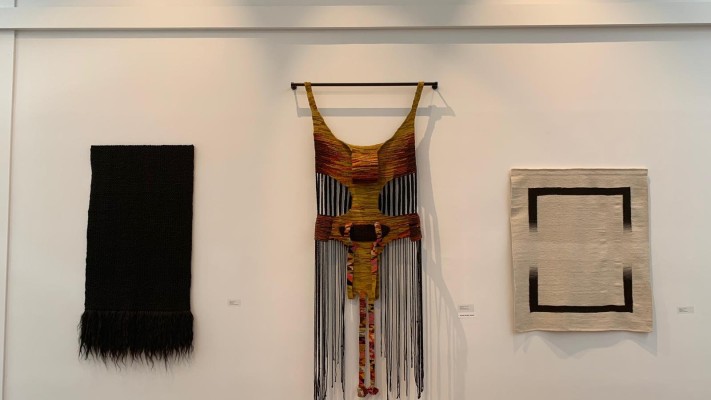 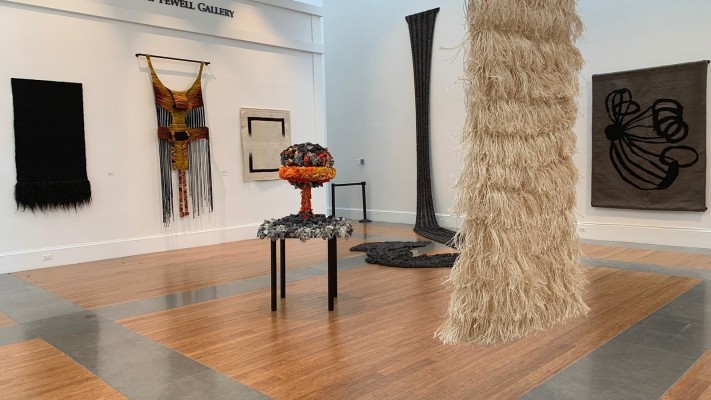 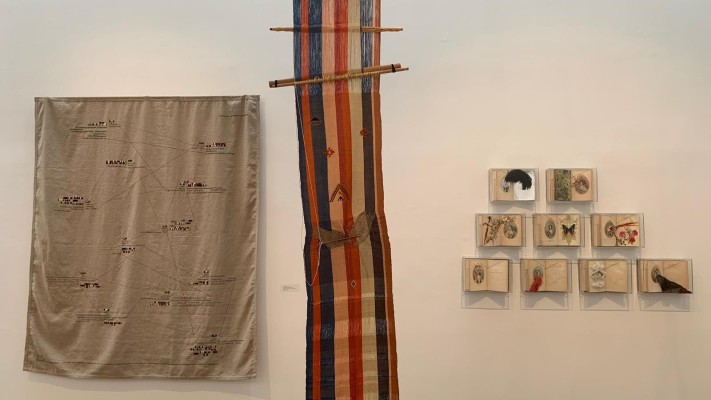 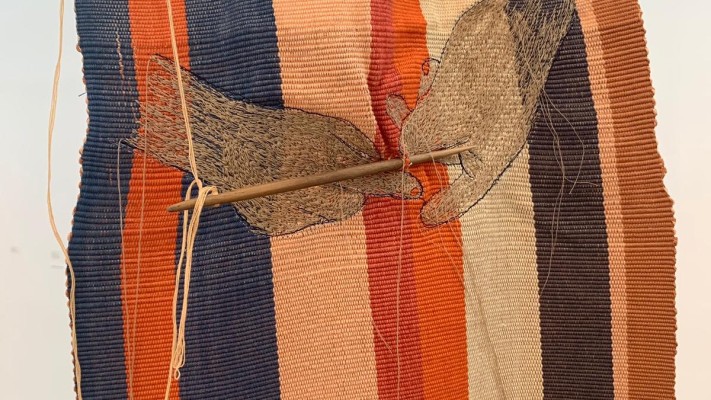 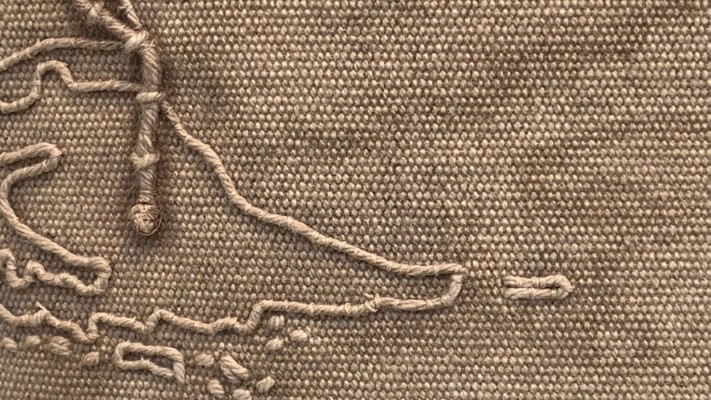 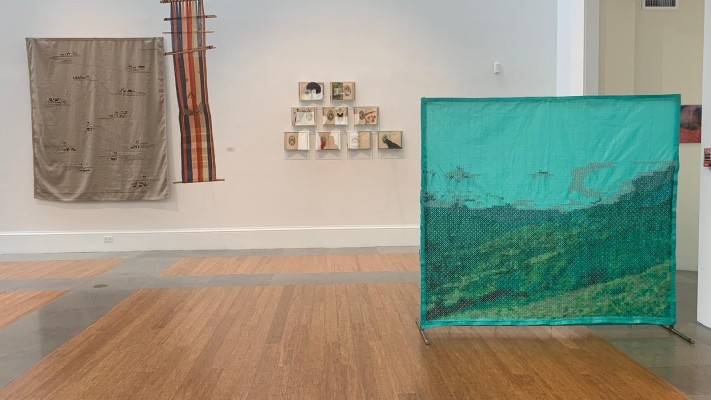 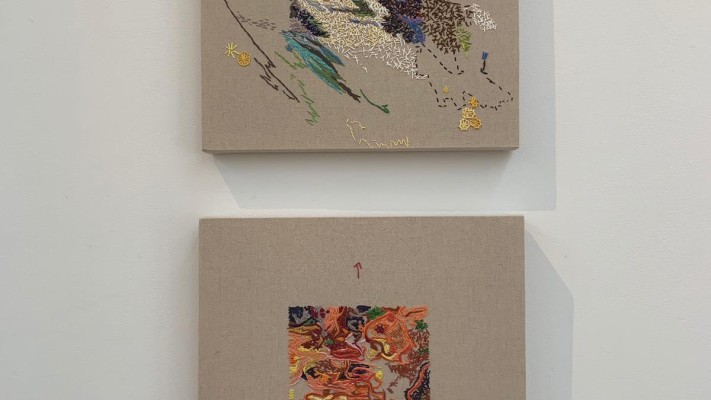 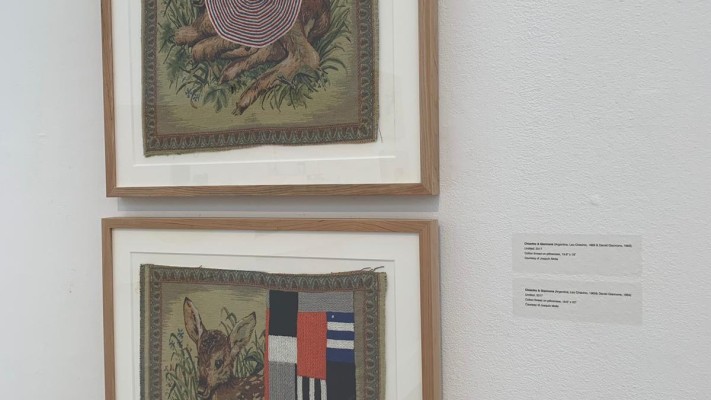 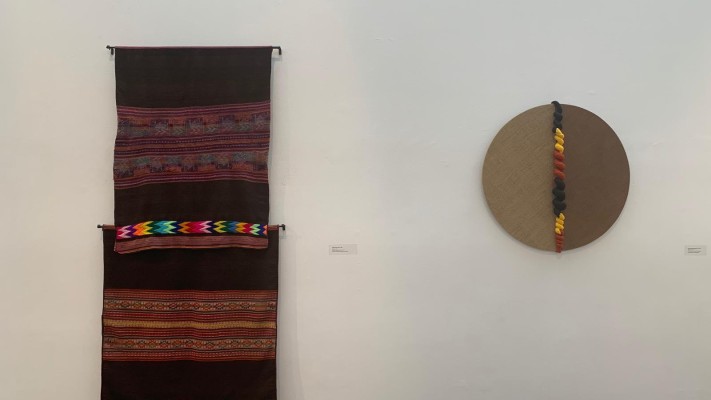 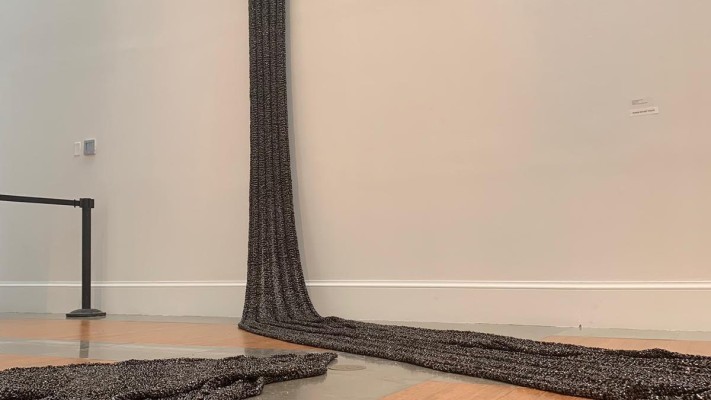 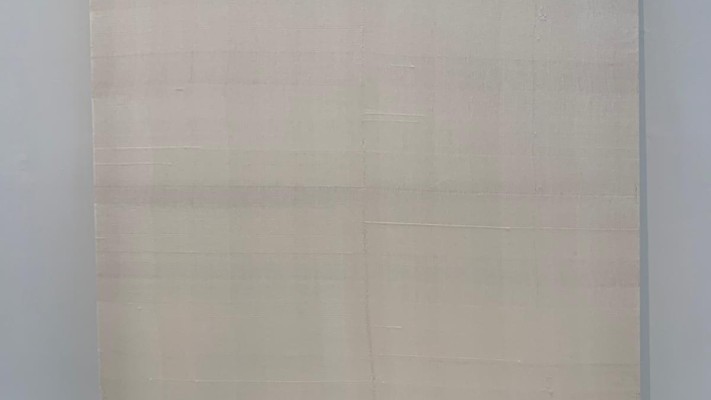 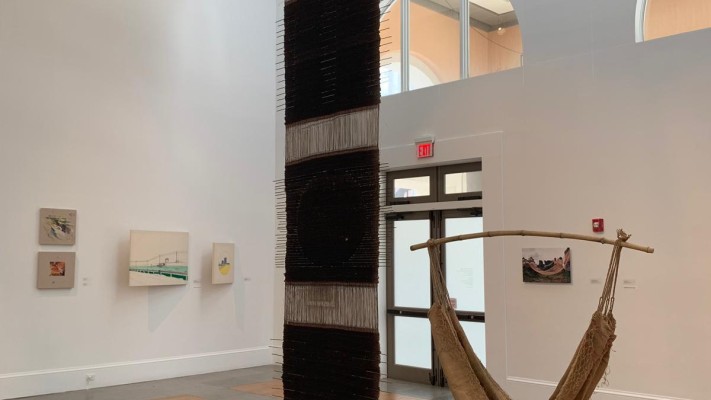 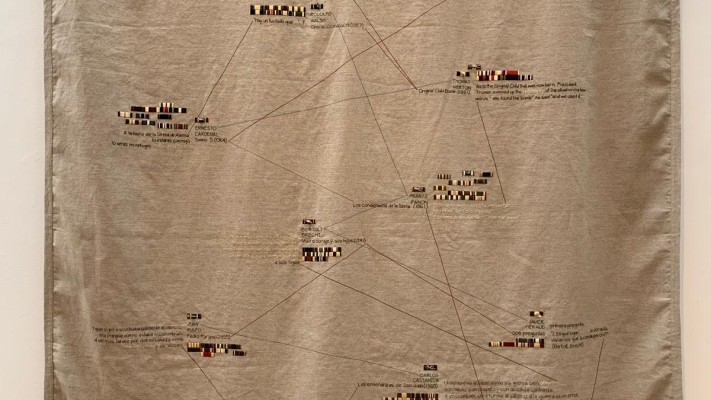 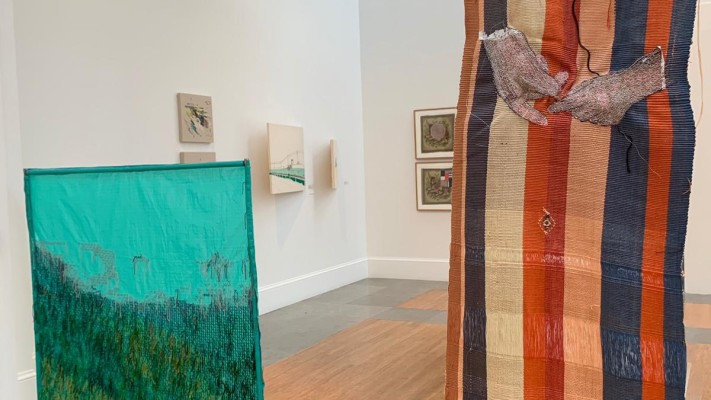 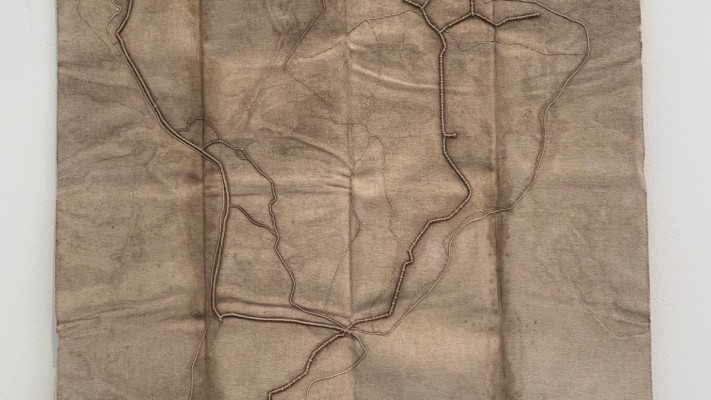 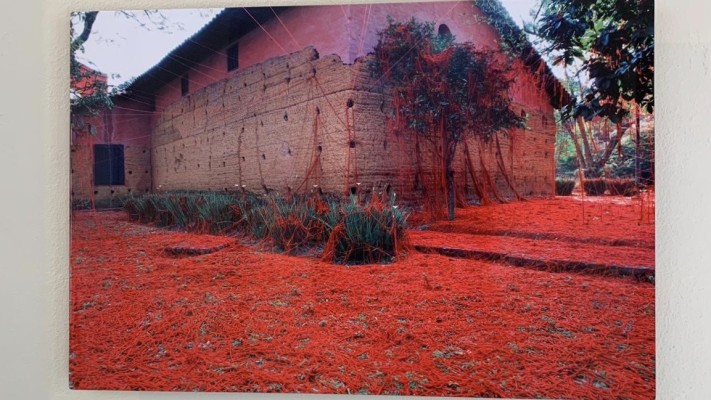 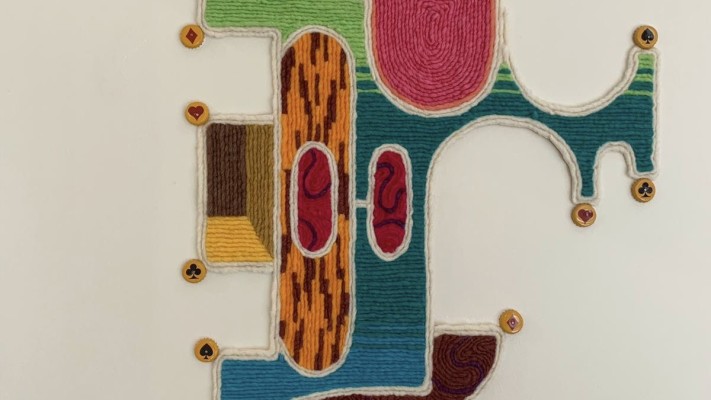 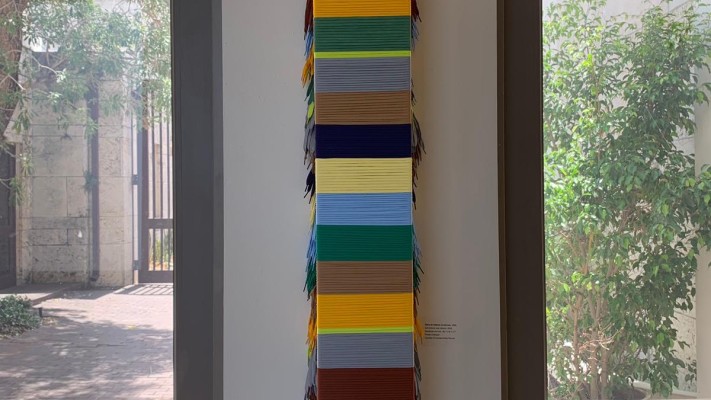 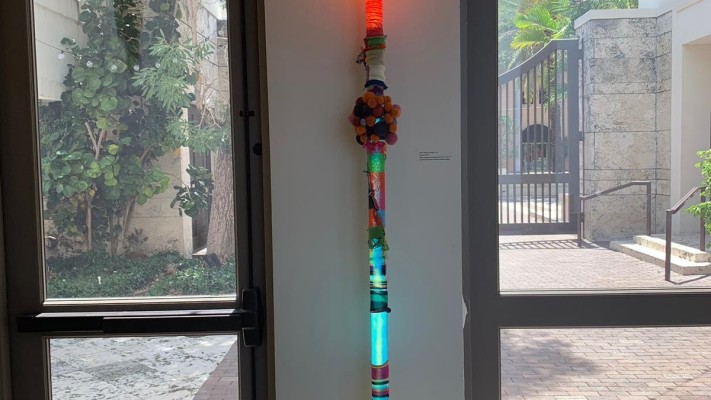 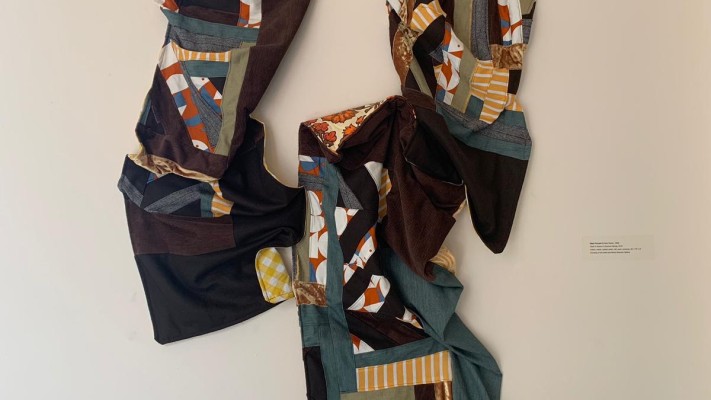